Showing posts from September, 2016
Show all

Looks You're Born With and the Power of Video and Music 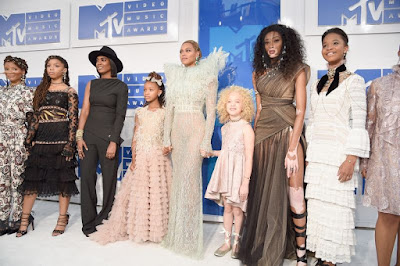 Beyonce with a number of women and girls at the 2016 Video Music Awards B eautiful melodies sometimes tell us terrible things (Tom Waits), but if you pour music on whatever's wrong, it'll sure help out (Levon Helm). Salif Keita, one of the best-known names in African music, has an album dedicated to inspiring young people with albinism to build body confidence and self-esteem. Keita's 2010 album La Différence won an award for its hope and joy for life themes. Salif is the son of two black African parents, but he was born ‘white’ because of albinism.  Albinism is a lack of melanin pigment in the hair, skin, and eyes of people, which can lead to severe visual impairment and even skin cancer. In his native Mali, albinism is often seen as an ill omen. Young Salif was disowned by his father, kicked out of school, and rejected by the local aristocracy. Society, including schools in Mali, perpetuates harmful beliefs about people with albinism, who are often shunne
Post a Comment
Read more
More posts