Vitabu Review | Wives At War: Praying the devil back to hell 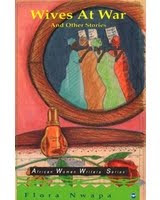 
West Africa is racked by conflict. Again. New information from aid workers in the region shows three-quarters of the refugees from Ivory Coast to Liberia are women and children, according to the SOS.

I glance at a report I'd just dusted on the shelf. The Impact of Conflict on Women and Girls in West and Central Africa is not the kind of book you reach for lightly. It was a desk review—very much dependent on information and guidance from UNICEF offices in Ivory Coast, Democratic Repubic of Congo, Liberia and Sierra Leone. The study had been undertaken as part of UNICEF's contribution to the Commission of the Status of Women held in New York 28 February-11 March 2005.

It's 2011 and the women and girls of West and Central Africa are still praying the devil back to hell.

In many of these conflicts, girls are the most likely to be abducted and forced to become 'wives' and fighters; subjected to sexual violence, and vulnerable to HIV/AIDs.

The UNICEF study details the horrors experienced by girls and women — particularly adolescent girls and the programs needed to address injustice and ensure accountability.

Searching for some kind of break, I pull a book out from its snug brown envelope. It had come highly recommended from someone who'd read it years ago. The author, I find out, was the forerunner to a generation of African women writers and publishers. She also is known for her work in reconstruction after the Biafran War. In particular for work with orphans and refugees.

Flora Nwapa, in her day, was one of many thousands of women who focused the world's attention on how war impacts some of the most vulnerable. I pause and wonder what information and guidance she would give now.

In Wives At War, Flora goes beyond conventional images of women as victims of war. In the first couple of stories, she shows a diversity of 'women's experience of war' with a cast of displaced wives and mothers who develop strategies to cope with war-induced changes and meet their responsibilities for the survival and well-being of their families. We also see women mobilizing social networks as they face conflict and struggles over identity, status and power.

The leading characters include urban/rural women: a wife and mother of seven who was constantly saving but hadn't bought a new dress in 4 years; Chika, whose rich, handsome and responsible husband had become too busy and less loving as he became richer; a professional woman caught up in an interracial relationship and a love affair with a married man; and a girl who cures a young man of a life-long obsession with a childhood crush.

The mood in the stories is exactly as is described on the back: It “varies from comedy to tragedy, satire to drama” but "reveals a compassionate insight into the lives of women fighting heroic wars."

Flora Nwapa was born January 18, 1931 in Oguta, East Central State, Nigeria. She obtained a Bachelor of Arts degree from University College, Ibadan in 1957, and a Diploma in Education from University of Edinburgh the following year. Upon her return to Nigeria, she joined the Ministry of Education in Clabar as an education officer until 1959. She then accepted a teaching position at Queen's School in Enugu, where she taught English and Geography from 1969-71. She continued to work in education and civil service in several positions, including: assistant registrar, University of Lagos (1962-1976), Minister of Health and Social Welfare, East Central State (1970-71), and Minister of Lands, Survey and Urban Development (1971-74).

Flora Nwapa began her career as an author with the publication of Efuru in 1966. She is often credited with being the first African woman to publish in English (although some controversy exists around this claim). She followed with her second novel, Idu, in 1971. After publication of these two novels, Nwapa became dissatisfied with distribution efforts of the publisher for her books and courageously decided to venture into publishing herself. She set up Tana press in 1974 which published adult fictions. All her subsequent adult fictions were published by Tana. Between 1979 and 1981 she published eight volumes of adult fictions. Her passion for children’s’ fiction inspired her to set up Flora Nwapa and Co., which published books combining Nigerians elements with moral and ethical teachings. Unfortunately, her foray into publishing died with her as the publishing houses she established fizzled out after her.

She died on October 16th I993 in Enugu aged 62. She was married with 3 children. Before her death she was honoured Ogbuefi,a title reserved for men of achievement. At the time of her death, Flora Nwapa had completed a manuscript of The Lake Goddess, her final novel. It focused on Mammy Water, the eternal spring and mythical inspirer of Nwapa’s fiction. Legends tell that the fairy godmother has her adobe on the bottom of Oguta Lake, near the author’s birthplace.