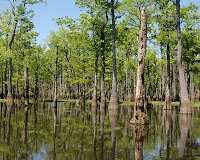 It's the Bayou Bowl tomorrow, Saturday, June 11. Prior commitments meant I couldn't watch the 2011 All Star high school football game between the best graduated players in Louisiana and Texas. But I'll definitely be rooting for a friend's son. He's one of the players in Louisiana's dream team, and he's going to Louisiana State University (LSU) this fall. He hopes to play in the first game of the season as part of the LSU Tigers football team.

When I found out my friend's son, we'll call him Al, was headed to LSU earlier in the year, I asked him whether he knew “Mike the Tiger,” the mascot that represents LSU on the football field, had a budget bigger than Sierra Leone's? He chuckled and asked wryly, "Who knew? I didn't either, I confessed. It wasn't till I read Mohamed Gbow Sheriff’s Bayou Days and encountered LSU campus life through the eyes and ears of the book's protagonist, Ahmad.

Ahmad had left Sierra Leone sometime in the late 1990s for Chicago to, as he put it, gain knowledge and a livelihood to impress his father and reward his mother for her sacrifices. When Ahmad felt like his fortune had run its course in Chicago, he drove 900 miles southwards "almost five times the width of Sierra Leone" into the bosom of the Louisiana Bayou. He had come to pursue a Ph.D. in math and science education at Baton Rouge's Southern University, a historically black college, but his summer semester would end abruptly.

A call to the chemistry department at Louisiana State University brought him a new opportunity. However, he would find himself in rather uncomfortable circumstances shortly after he was approached by police, identified as a “suspicious black male.” Ahmad would slowly push that brush with the law, and the rather lax response to his complaints, under the carpet. On the back of a warm winter, and in the wake of his first experience of Mardi Gras in New Orleans came news from home. Ahmad had lost his father but the United States immigration service denied his request to attend the funeral in Sierra Leone and return to his American campus.

The clouds got even more ominous for Ahmad when a seventh murder, the fourth victim in a couple of years was found in Baton Rouge. All the men of a certain age in the little big town in Louisiana became suspects. But when Ahmad balked at giving a DNA sample for fear of being framed for the body count, he unwittingly made himself “a principal person of interest,” and his “odyssey in the Bayou” began as he worked to “end his Ph.D. ordeal.” A process which began in his native Sierra Leone 35 years before, where Ahmad got his start.