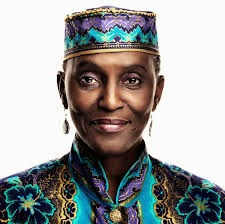 Director, teacher, and writer Anni Domingo has been acting for 40 years. She has worked in theater, radio, television and films —touring Europe, the United States and Australia as a Shakespearean actress. She runs her own company, Shakespeare Link, which offers workshops on Shakespeare in schools, youth clubs and theaters all over the United Kingdom. She has written workbooks on Shakespeare, and these are now used in many schools.

Anni has worked for British Broadcasting Corporation (BBC) radio and other stations as an actress and broadcaster. She has written children’s plays which have been performed in schools and her poems have been published in the poetry anthology “Secret and Silent Tears.” She is a member of the Sierra Leone Writer Series Editorial Board.

Currently, she is editing her novel, “Breaking the Maafa Chain” and recently published her memoir, “Empire Girl” featured in the Words & Women One anthology. Anni’s story is based on her mother’s experience of growing up in Sierra Leone during the days of the British Empire, when some countries were ruled directly or indirectly by Britain.

Vitabu: “Empire Girl” has just been published and you're working on a story set in the Slavery era. Tell us about both works.

Anni Domingo: “Empire Girl” is a short story based on my mother’s experience of growing up in Sierra Leone during the days of the [British] Empire and it has been published in the Words and Women One anthology.

“Breaking the Maafa Chain” is a historical novel dealing with the theme of survival—survival of hope, identity and tradition against bitter odds. It is set in the mid-nineteenth century, towards the end of the transatlantic trade, when transporting slaves via the ‘middle passage’ from Africa to America and the West Indies was a risky but lucrative business. I was thrilled to have it recently short-listed for the Lucy Cavendish fiction prize.

Vitabu: You also write poetry. How is it different from writing a novel, short story or play?

Anni: Poetry is frequently written with a particular awareness of the sound of language artfully arranged using tools of sound, rhythm, shape of lines, image and metaphor to create an emotional response in the reader. Poetry may or may not rhyme but the rhythm of the language will be of central importance and the author may have spent extra time working to achieve carefully crafted, vivid word pictures.

Short stories are just that—stories that are of a length that would ideally allow them to be read from start to finish in one sitting. A short story is a work of fiction that is usually written in prose often in narrative format. This format tends to be more pointed than longer works of fiction.

Plays usually indicate a piece of writing that is intended to be acted out—a performance on a stage of some sort with people acting as the characters in the story, allowing an audience to see the action unfold.

All of these forms can overlap—poetry can be presented as a dramatic play; a short story may be written in poetic form, etc. The three formats are different but not exclusive types of literature, presenting stories in three different formats.

Vitabu: What got you interested in speech and drama?

Anni: It seems as if I have been interested in drama all my life. I first appeared on stage at the age of four. I was also interested in ballet and went twice a week to Mrs. Cook’s ballet classes at International School. My mother, Rosa Domingo, was a talented amateur actress. I learned a lot about acting by listening to her learning lines and going to rehearsals with her. My parents also had a popular radio program, “The Two of Us” and I took part in that show for quite a few years. My parents, Rosa and Dio were renowned ballroom dancers and I later demonstrated ballroom dance step on their TV program in the 1960’s.

Vitabu: When did you get your first break in acting?

Anni: My first break came after I finished Drama College in England. I got into the musical version of “Gone with the Wind” at the prestigious Drury Lane Theatre in London’s West End. This was a very popular show and it ran for over two years. After that came many theatre and television shows, films with people such as Sean Connery and Delroy Lindo; working all over Europe and Australia and touring the United States of America with several Shakespeare plays.

Vitabu: How many Shakespearean plays have you read/acted?

Anni: Over the years I have read around 25, acted in eight—touring the USA with some such as Macbeth and Romeo and Juliet. I have written workbooks for five Shakespeare plays and these are still being used in schools around the UK.

Vitabu: I read this quote the other day:


How do you make 400-year-old plays and arcane language relevant?

Anni: Although Shakespeare’s plays are over 400 years old and the language could be called arcane it has been translated into practically every language possible.  The stories still resonate wherever it is performed in the world because they are stories about human beings, their loves, hates, fears and joys and hold a universal truth. We can still learn a lot about life and people’s foibles from reading, studying or going to see a Shakespeare play.

Vitabu: Looking back over your career, what were some of the best moves you made in addition to bringing your talents to the marketplace?

Anni: I have been acting professionally for over 40 years now and I think one of the most critical decisions I made early on was to stay in England and persevere in getting suitable roles. Things are improving all the time for black actors in England with integrated casting and I am pleased that I have been a part of that move.

Anni: At the moment I continue to work on both acting and writing. I have just finished doing a theatre show up in Scotland and an episode of the popular BBC soap drama ‘Doctors.’ I am also working hard on editing my novel, “Breaking the Maafa Chain”

Vitabu: How do you relax?

Anni: I must admit that I love my job and the most relaxing thing for me is to go to the theater; catch up on my reading or visiting with friends.

Vitabu: What are some of your best memories of growing up in Sierra Leone?

Anni: Some of my best memories growing up in Freetown are of FSSG (Freetown Secondary School for Girls) and of sitting in my dad's shoe factory in Pademba Road. I remember Sundays and going to the beach after church in my mother's white, open-top car. I loved the wind blowing into our faces as we sped along to Cape Sierra hotel and the beach. Going to the Aqua Club was also a treat that my siblings and I enjoyed. My memories are of a carefree Freetown, and getting together with friends and family.

For readings and copies of the anthology, which has just been shortlisted for a Saboteur Award (hurrah!), click here