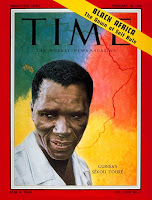 The People's National Party (PNP) was formed mainly by defections from the Sierra Leone People’s Party (SLPP) in September 1958, the same month Guinea voted to exit the French Community.

The PNP based their hopes of success on the split in the SLPP, which they considered would occur on the death or retirement of an ailing leader, Milton Margai.

The PNP had neither a written constitution nor a policy manifesto. However, their aims and objects were expressed as the attainment of independence and they were not averse to seeking outside help.

According to scathing Colonial diplomatic cables on PNP leader Albert Margai, which described him as “greedy and unscrupulous for power” there was some concern that Albert had visited Sekou Toure in neighboring Guinea.

Although Britain and the United States had been allies throughout World War I and World War II, colonial policy was decidedly cool towards cooperation between African countries like Guinea and Sierra Leone, which shared historical, cultural, and economic relations.

Guinea covered 95,000 square miles, more than three times the size of Sierra Leone.  Both countries had rich deposits of bauxite, iron ore and diamonds.
Toure could draw a line from Samori Toure, who fought against French rule in the late 1800’s, to his push for Guinea to become the first West African territory to reject membership in the French community.

The September 28 referendum In Guinea was part of a wider referendum across the French Union on whether to adopt a new French Constitution.

If accepted, colonies would become part of the new French Community; if rejected, the territory would be granted independence.

The Guinean electorate voted no in a referendum on independence and Guinea proclaimed itself a republic in October the same year.

One of seven children, Sekou Toure was born Jan. 9, 1922, in Faranah, a town near iron ore deposits and the Niger River. Toure’s parents, Alpha and Aminata, were farmers.


Aged 15, Toure was expelled for leading a protest against the quality of food at the Georges Poiret Technical College in Conakry. He went to work in Conakry’s post office in 1921.

While in his early 20's he became active in the postal and communications service union, rising to become its secretary general and taking it into the Confederation Generale du Travail, the Communist-dominated French labor federation.

In 1946, Toure was one of the main organizers of the African Democratic Rally, a popular-front organization active in 12 French African territories.

In the 1950's, he took a seat in the Guinean Legislative Assembly, became secretary general of the Guinean Democratic Party, mayor of Conakry and a representative from Guinea to the French National Assembly, where he was known for his eloquence.

A few hundred miles away in Sierra Leone was another trade unionist and political leader who would become a household name.


From 1931 to 1946, Siaka Stevens, born in 1904, worked on Marampa railway, construction linking the Port of Pepel with the iron ore mines at Marampa. Later he was a stationmaster and stenographer at Marampa Mines. In 1943, he helped co-found the United Mine Workers Union and was general secretary for fifteen years. He was appointed to the Protectorate Assembly in 1946 to represent worker interests. In 1947, Stevens studied labor relations at Ruskin College and was minister of lands mines and labor from 1951 to 1956.

Stevens left the SLPP in 1957 after Albert Margai took on his brother Milton Margai in a leader battle and won.

Albert became a registered nurse and later a dispenser. He was a member of Sierra Leone’s Medical Department from 1931 to 1944, when he won a scholarship from the Protectorate Education Progressive Union (Sierra Leone). He later travelled to England and read law at the Inner Temple Inns of Court, where he qualified in 1948.  Prior to his political career, he owned a private law practice in Freetown.

In 1951, he was elected to the Legislative Council as the first Protectorate Member, and became the first Minister of Education when he was appointed to the cabinet in 1952. In 1957, he was returned to parliament in the general elections as M.P. for Moyamba South Constituency.

Shortly after the elections, Albert challenged his brother for the leadership of the party and was elected leader of the SLPP, but stepped down for his elder brother after he had been guaranteed that his closest ally, Siaka Stevens, would return to the cabinet.

It was Milton's failure to honor this and other pledges that led Albert to refuse the cabinet position he had been offered, and to form his own party, called People's National Party, in September 1958.

As the recognized leader of the progressive wing of the SLPP, Albert advocated a faster pace of development for Sierra Leone and took an "African" stand on most international issues. Albert was also known to have advocated less attachment to traditional institutions, and while he was leader of the People's National Party (PNP), he openly asked traditional rulers to stay out of politics.

He had great respect and admiration Sekou Toure and Kwame Nkrumah, and sought to emulate the two leaders in their stands on international issues. Albert personified the African personality both in his attire and his public utterances on African issues.

That was no surprise, according to Tejan-Sie, who shared a law practice with Albert Margai at 61 Westmoreland Street.

My colleagues, Margai, Taylor-Kamara and Massallay knew how much time and energy I devoted to studying the British political scene. Although I was not a card-carrying member of the Labour Party I was invited t many of its committees charged with studying African political organizations and activities in the United Kingdom.

Before Albert Margai returned home in 1949, he and Marcus Jones, later Justice Marcus-Jones, were living in rented premises on 88 Eltham Road in southeast London. The house was a two-storey building.

The landlord, his wife and children occupied the basement and first floor. Margai and Jones occupied the attic so that the second floor, which had three rooms, was vacant. He negotiated with the landlord who willingly rented the three rooms to us. A younger man called Silla, who had been in England on studies, joined us.

The West African Students Union had been formed during the latter part of the twenties, and was not only the meeting place of all West African students in the U.K. and Ireland, but was also the spring board and training ground for future political leaders in their various countries. It was officially recognized by the Colonial Office at the time and received grants from all the West African governments.

The Union hosted political leaders from the continent of Africa. It held seminars inviting leading political Africanists of the time to give lectures and to answer questions.  These seminars were attended by a few eminent Africans who were to become household names, not only in their own countries, but worldwide. They were Jomo Kenyatta, Kwame Nkrumah, Makonnen and others.

Such was the desire for the end of colonialism in the brave new post-war world, and one of the major planks on which the Atlantic Charter of Roosevelt and Churchill was signed, that many West African students actually enrolled themselves as members of the Communist party.