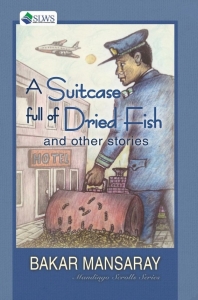 Vitabu: In Abayomi Roberts’s report on your book launch, he talked about how the African-Canadian community came together in Edmonton last fall for A Suitcase Full of Dried Fish and other stories.

Abayomi said your speech touched on your own  life and work as an airline steward with the then national carrier in Sierra Leone. You reportedly said that experience inspired the title story.


Bakar Mansary: My experience as a flight attendant with Sierra Leone Airlines inspired the title story in my book, “A Suitcase Full of Dried Fish and other stories”

The title story was set in the mid-1980s, when I travelled from Freetown to Paris as air cabin crew, with a suitcase full of dried fish.

My intention was to sell them to an African woman in Paris. However, by the time we were in sight of l’aéroport d’Orly, our flight was unable to land due to bad weather. As a result, the pilots were forced to head for l’aéroport Nice Côte d’Azur in southern France, where the aircraft landed safely. We were then transported to Paris by iDBUS coaches.

Unfortunately, by the time I arrived at the buyer’s residence with my suitcase full of dried fish, they were already infested with maggots. We cleaned some of the fish and threw the rest in the garbage. Needless to say, it was a considerable financial loss for me.

The story in the book started with the main character, which in reality wasn’t me, migrating from the rural area to the bustling urban center of Freetown in search of employment. Ultimately, he became a flight attendant for the national airlines.


Abayomi also said you drew many of the story plots and characters from your travel around the world as an airline employee and from meeting people from diverse cultures. "A Suitcase full of Dried Fish’ is a collection of 12 short stories with settings in Canada, France, Ghana, Jamaica, Kenya, Liberia, Nigeria, The Gambia, UK, and Sierra Leone.  What are some of your favorite memories? Any unfavorable ones? 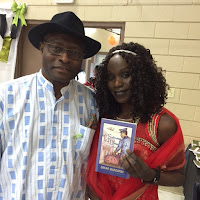 BM: My main purpose of writing the book was to share my experiences as a flight attendant.

Many of the plots and characters in my book, “A Suitcase Full of Dried Fish and other stories” were related to my meeting people from diverse cultures. By setting the scenes in different countries, I planned to attract a larger audience. So, in the book’s collection of 12 short stories with illustrations, you’ll find settings in Canada, France, Ghana, Jamaica, Kenya, Liberia, Nigeria, The Gambia, UK, and Sierra Leone.

My 15-year career in the airline industry took me to fourteen countries, from Jordan in the Middle East to the United States of America in the west, and from Scotland in the north to Ascension Island in the South Atlantic Ocean.

One of my favourite memories was that of seeing a French couple make love on board our partially full aircraft. Another favorable memory I should mention was that of receiving substantial money as travelling allowance, staying in five-star hotels and eating good food.

One of my unfavorable memories was taking off from Las Palmas to London at night with our aircraft’s main entry door not properly secured by our purser. As a result, the pilots were forced to turn around and dump some fuel in order to land safely in Las Palmas.

Another unfavorable memory was that of flying from Tripoli to Amman with an aircraft full of prisoners of war released by Israel. Remarkably, the airline station manager in Tripoli told us the passengers were a group of teachers.

Vitabu: Abayomi also said you described the recurring theme in the book as “perseverance in times of adversity.”Your stories portray contemporary social trends like online dating, and age-old relationship challenges in marriage, love, and friendship. One story revolves around war and forced migration. Something we see happening with such devastating consequences this year. Tell us your refugee story fleeing the war in Sierra Leone, and about putting down roots in a new country.

BM: In the book, aspects of my own stories as a refugee can be found in the stories entitled “Refuge in Banjul” and “Eternal Bliss”

Between 1997 and 2000, and due to the civil war in Sierra Leone, I was forced to flee with my wife, a daughter, and a son. On one occasion, we travelled to Conakry, Guinea, and on the other to Abidjan, Côte d’Ivoire.

By January 18, 1999, during the invasion of Freetown, my next plan was to leave the country with my wife and two children.

On the day of my family’s departure from my cousin’s home at Congo Cross, we avoided walking through Freetown’s main streets. Heading for Government Wharf to join a ship that was sailing to Conakry, we carried on our heads bundles of personal belongings.

On our way, we saw buildings razed to the ground and piles of rubble everywhere. As we continued, ECOMOG soldiers intercepted us. At these military checkpoints, my airline employee ID card showing my position as Market Research Superintendent went a long way in giving us easy passage.

Death had become an accepted norm for us. The shocks were no more as Sierra Leone had become a forgotten part of the world.

In the barrenness of our escape from the war the MV Madame Monique had become an oasis of luxe et volupté. As I plunged into the ocean, I thanked the almighty God for having saved some money for a day like this when I was able to pay our passage.

The long boring wait for us to set sail made me lose sense of time. I tried to imagine life without timekeeping. But on that day, I consciously measured time in fear that it will run out. It was only at dusk of the next day that the poor old MV Madame Monique staggered out of the harbour.

Once in Conakry, I came to discover that our living conditions were worse than I could have ever imagined. Electricity and pipe-borne water supplies were practically absent. The toilet facility in the overcrowded compound was unhygienic. House flies and mosquitoes were in constant battle with tenants in the adjoining rooms. Within weeks, myself and family lost weight considerably.

At the end of three months, I could not find employment in Conakry. It was then that I decided to leave for Abidjan where I had a friend, and cousins of my wife. I left my family in Conakry and travelled alone. However, at that time, my friend was skeptical about my plans of relocating to Canada. He did not believe I would be issued with a permanent resident visa, especially after submitting my application since 1997. He pointed out repeatedly that without money I may as well forget about the idea of relocation. Nevertheless, during my stay with him, he supported me greatly both morally and financially until my family was able to join me.


Finally, on Wednesday, January 17, 2001, I departed the Kotoka International Airport in Accra for New York and then Toronto.

I arrived in Canada on a wintry day on Thursday January 18, 2001. Nothing will ever dim the glory of the hour when I arrived in Canada, or lessen my longing and quest for peace, whose value I came to cherish even more after the civil war in Sierra Leone.

In the first month or two, and with only menial jobs to survive in Canada, I almost returned to Sierra Leone. However, with perseverance during adversity, I was able to stay in the country and sponsor my family to join me.

Fifteen years later, I find Canada to be an astonishing place to be, with beautiful and unblemished landscape. A starkly charming and mysterious land of hospitable people where I was able to pursue my writing career in peace and security.

Bakar Mansaray's book is available at  Sierra Leone Writers Series and the African Books Collective
The book is also available in bookstores in Sierra Leone and at the Sierra Leone Library Board.
Call or text telephone number 1-780-200-5541 for more information.
Visit: www.mandingoscrolls.blogspot.com