Vitabu Reads: From the Land of Diamonds to the Isle of Spice 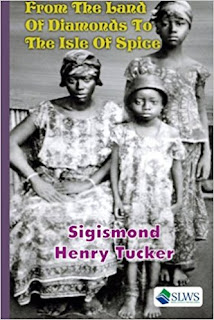 When young Christopher Williams ventured out of Freetown on a merchant ship bound for Matadi in 1925, little did he know that he would leave footprints in the sand that an unborn grandson would track.

Using the figurative milestones planted by Christopher almost a hundred years ago, Sigismond Henry Tucker creates an intricate picture of his family's migration story of love, endurance, and hope through the pain of separation.

Sigismond's autobiography “From the Land of Diamonds to the Isle of Spice” is a complex lattice of intersecting interests.

On the one hand are black Africans like Sigismond's grandfather, arriving by ship at trading ports dotted all over the continent's big coast; people native to the Congo, Malinke merchants from Senegal carrying out trade on routes throughout west and central Africa; and the bold Americans, English, and Welsh exploring opportunities in old ports of  slavery.

Sigismond doesn't say what set his grandfather's travels in motion  from  Freetown in 1925.

But it probably has to do with the unchanging story of young black men looking for work with big European employers like merchant vessels, which offered a half decent wage mixed in with some adventure.

Labor strikes happening in the colony of Freetown could have been another reason.

Angry railway workers were  demanding thousands of pounds in unpaid wages and redundancy money from the colonial government in Freetown. The resulting stoppages would have made life difficult for young people like Christopher who were just starting out in the workforce.

Incidentally, one of the two seafarers with Sigismond's grandfather was Isaac Theophilus Akunna Wallace-Johnson, a workers' leader, journalist, and activist.


There's some confusion as to the dates in Sigismond's book however.  In one section, he says the three seamen left around 1925. In another chapter, he wrote that Wallace-Johnson lost his job as a customs officer in 1926 and left Sierra Leone to become a sailor.

Once in Matadi, the author tells us the three seamen, including Christopher, Sigismond's grandfather, ran into a rich American who offered them a job. Christopher, we are told,  later moved to a mining town inland.

The story doesn't end there.

Christopher marries a woman originally from Senegal and the couple have two daughters.  He grows rich but after a near fatal encounter with a dying buffalo, Christopher thought of reconnecting with his roots by sending one of his daughters home to Kossoh Town in Hastings, Freetown, to see the sister he had left behind.

His wish came true when Mr. Thompson, the third seaman who had traveled with Christopher and Wallace Johnson, decides to return home and take Christopher's daughter, 12-year-old Lillian, who could only speak Lingala and Bakongo, back to Freetown.

Time passes. Lillian grows up and settles down with Sigismond's father, who had moved to Hastings in Freetown from Sherbo Island, home of the Tuckers descended from an English trader and agent, John Tucker, and a Sherbro princess.

By 1953, Sigismond's parents had separated and he doesn't see his father again until 1968 when word came that he had died in Kenema, about 300 miles east of Freetown.

A few years later Sigismond leaves Freetown for the United Kingdom in September of 1971; he doesn't return until 1990.

But not before going to Brazzaville in December of 1989. By then he had met and married his wife from Grenada in the Caribbean and started his own family in Manchester, England.

Private inquiries had led Sigismond  and his mother to the family she left behind when she was only 12-years old.

The reunion and restoration of  Christopher's family is probably one of the most fascinating parts in this intriguing story of human voyages and migration in Sigismond's DNA. #seafarersmatter