How Sugar Loaf Got Its Name, and Other Stories | Fantasy History 13

From the harbour, a long sand-bank stretches across the entrance, or rather estuary, and it must be approached on the south point, on which is Carpenter's rock, to be seen at low water but covered at high, which ships safely avoid by taking a wide berth...The only danger to be apprehended is during the Tornado season, when such is its violence that ships are frequently driven from their anchors.
The appearance of the Colony from sea is particularly marked by a high-peaked mountain, which, from its conical shape, is commonly called the “sugar-loaf” in the neighborhood of which are three other hills of minor attraction. The most elevated is seen above the clouds, and may be described at the distance of thirty or forty miles, perhaps more, long before the low land. (William Whitaker Shreeve. Sierra Leone: The Principal British Colony on the Western Coast of Africa, 1847 pp 21.).

Freetown's peninsula is about 18 miles long from north-west to south-east by about 12 broad. It lies between the estuary on the north and Yawry Bay on the south. Lengthwise it is traversed by a range of high hills reaching a height of 3000 feet in the Sugar Loaf and nearly as much in Mount Horton farther south. The rainfall of Sierra Leone is from 150 to 169 inches annually. The three months of January, February and March are rain less. Starting in April or May, the rains reach their maximum in July, August and September, and rapidly diminish in October, November and December. It sometimes rains for thirty hours on end, but generally twelve hours of rain are followed by 24/30 or more hours of clear and pleasant weather. At the higher heights there are about 40 inches more rain than the low-lying areas on the peninsula – Encyclopedia Britannica 1890


Most climbed route from Regent village, up the black death (Sugar Loaf on Peakery) 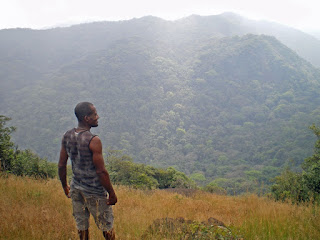 I have waited for the opportunity to climb Sugar Loaf again so when I found out there was a hike today, I ‘signed up’ for it. Not only was this going to be a hike up Sugar Loaf, it was also the launching of a new trail from Regent to the top of the mountain. The event was organized by WAPFoR (Western Area Peninsula Forest Reserve) an organization working with the Ministry of Agriculture to preserve the forest. One of their activities is to create 80 km of trails to encourage eco-tourism and educate people on the need of preserving the forest. Continue reading here