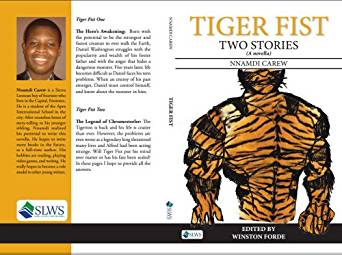 Nnamdi Carew was fourteen years old when his science fiction meet fantasy was first published in 2013.

The two stories that make up his colorful novella, Tiger Fist One and Tiger Fist Two, superbly blend superheroes like old Marvel, Captain America, and Superman, while blurring the lines of video game icons in "The "Legend of Zelda" and "World of War craft" with modern-day battles.

Tiger Fist's story starts with how a baby boy, the main protagonist, became Tigerton – a huge cat-like creature with orange stripes and a menacing tail.

Soon after the boy in Nnamdi's story was born to anthropologists Austin and Bianca Blake, the couple was killed by Tigerton, a hybrid of a tiger and a human similar to the mythical Minotaur, which Ovid the Roman poet described as being part man and part bull.

Austin and Bianca had traveled to China to look for fossils and conduct studies into ancient beings and creatures.

Intrigued by the hapless toddler, who had somehow gotten the hang of using his arm to throw a pebble at the brutal invader, Tigerton placed a paw on the child and murmured a few words.  The toddler's skin grew fur; he sprouted a tail, and his teeth turned into greatly enlarged canines.

When the child becomes human again, Tigerton escapes the scene and the baby is rescued by a Shaolin monk, who'd heard cries for help.

The monk, Hung Li Chung, calls the boy Daniel and raises him at a nearby Chan temple. Then one day, a triad rides into town looking for revenge at the Buddhist monastery.

Unlike Superman, whose real identity as Clark Kent was a secret that only a few knew, the monks told Daniel that he was a successor to Tigerton, an incarnation of Amaeron, the most powerful Tigerton to walk the earth.

Over the next five years, Daniel trained in martial arts before leaping over the Great Wall in his alter ego on his way to America.

Like a bolt of lightning, Tigerton (Daniel) streaks across Tibet, India, Persia, and Turkey before making a  pit stop in London. After halting a great British heist, and claiming the name “Tiger Fist” for the first time,  Daniel meets Greg Turner, who just happened to know Austin Blake, famous for discovering the skull of the Anabulen; and John Washington, a childhood friend of Austin who was now a millionaire.

The action really takes off once Daniel arrives in San Francisco. The nine-year-old stuns his soon-to- be guardian, John Washington, by balancing his suitcases on the tip of his index fingers and spinning them around like a basketball. Just one of the many feats Daniel performs, yet somehow keeps his identity secret.

There are other unexplained parts of the story.

While the monk that saved baby Daniel dies from his wounds in a battle with the avenging triads, we never really find out what happened to Greg Turner.

That might be the whole point of fantasy drawn from graphic novels, video games, drones, and science fiction, but I do hope that Nnamdi revisits his story just as the San Francisco-born author Jack London did.

London's “To Build a Fire," which famously has two versions, was first published in 1902 and the other in 1908. "The story written in 1908 has become an anthologized classic while the 1902 story is regarded as  a lesser known story."