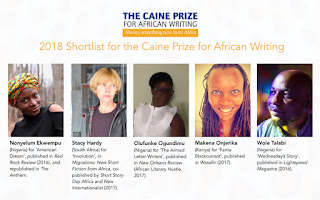 The winner of the £10,000 prize will be announced at an award ceremony and dinner on Monday, July 2 2018. Each shortlisted writer will also receive £500.

Joining Dinaw Mengestu on the 2018 judging panel are Henrietta Rose-Innes, South African author and winner of the 2008 Caine Prize; Lola Shoneyin, award-winning author and director of the Ake Arts and Books Festival; and Ahmed Rajab, a Zanzibar-born journalist, political analyst and essayist.

The Caine Prize is named after the late Michael Caine, former chairman of Booker plc and chairman of the Booker Prize management committee for nearly 25 years.

The Prize is awarded for a short story by an African writer published in English (length 3,000 to 10,000 words).

An African writer is taken to mean someone who was born in Africa, or who is a national of an African country, or who has a parent who is African by birth or nationality.