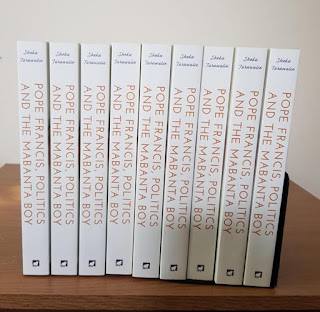 Sheka Tarawalie,  a journalist and former cabinet minister and press secretary in the Ernest Bai Koroma administration, is now a published author. He shared his good news and information on his new book in a letter to the press. Read on.

Although I had already been earlier incorporated as an author by the publishers (Troubador -UK), today is the formal publication date of my first book, 'POPE FRANCIS, POLITICS AND THE MABANTA BOY' -  https://www.troubador.co.uk/…/pope-francis-politics-and-th…/

This means you can now buy it from anywhere to wherever in the world from their website, where I have been given a permanent customised author-page (link above). Although Amazon got pre-release rights to sell the book (and even already delivered it to some lucky readers) before today, the official date for the records/future reference is 28 May 2019. Please note that the publishers themselves started taking retail orders directly from individual customers a few days before today. It's normal practice in order to meet readers' requests.

For UK residents, you can now get the book from any Waterstones bookstore - also applicable wherever the latter has outlets in the Republic of Ireland and mainland Europe.
For Sierra Leone, a consignment is being arranged, which could take about a month or so to arrive. However, if you have friends/family in the UK, you may want to ask them to send it to you as a gift (It’s just £ 12.99). Or you can wait for just a little while longer.

For those in the US and elsewhere who made pre-orders, I know you have now got delivery information – and it’s just a matter of time.

Meanwhile, in consultation with the publishers (who have sole rights for publication and distribution of this book), official launch/book-signing dates will soon be announced for Sierra Leone, the UK, and Italy (Rome).

It has been a pleasure having all the support from you, my dear friends since I started this literary journey. I have done my part; now it's your turn as readers to consume (and analyse, as you may wish) - 405 pages.

Thank you all
To God be the glory!

Pope Francis, Politics and the Mabanta Boy
A Journalist's Journey with God and Humanity
by Sheka Tarawalie

Pope Francis, Politics and the Mabanta Boy is Sheka Tarawalie’s autobiography tracing his early life in Sierra Leone, through imprisonment and being declared a ‘wanted man’, before his exile to the UK. The book also remembers his political appointment. Working through continual conflict and confrontation with his government colleagues and the President who appointed him, Sheka still managed to be within the system for several years and at the same time make landmark inputs.

In addition – while recounting the circumstances of his meeting with Pope Francis at the Vatican in his official capacity – Sheka delves into the history of the Church, the powers of the Pope, the child sex abuse scandals – even the historical ‘sins’ of the Crusades, the Transatlantic slave trade and the sale of indulgences which led to the Reformation. A book that is likely to stir debate, Pope Francis, Politics and the Mabanta Boy goes on to confront the many delicate issues around contemporary Islamic fundamentalism, Al Qaeda, Islamic State and 'Islamophobia'.