Book Day is Every Day

In March 2015, the Hill Museum & Manuscript Library at St. John’s University in Queens, New York, announced that it was creating digital records of more than 22,000 rare and historically significant documents from a library in Mali, Timbuktu.

The family library of Mamma Haidara has one of the largest manuscript collections in Timbuktu, and some of its documents date back to the 13th century.

“Our team in Bamako has made remarkable progress. After a full year of work, the team digitized over 250,000 images from the Abubakr Ben Said Library,” Rev. Columba Stewart,  director of the
Hill Museum & Manuscript Library, said in a statement. “In the past two months, since the start of work on the Mamma Haidara Library, they have already digitized more than 60,000 additional images."

In 2014, the British Guardian newspaper published an article about how Mali's ancient manuscripts were saved. Abdel Kader Haïdara is the librarian credited with masterminding the smuggling of the manuscripts to safety from under the noses of the jihadists. A year earlier, The Boston Globe did a story on how a digital-archive project became a cultural lifeline.

On March 10, 2022, with little fanfare, Annie Njanja wrote on TechCrunch that the digital library was now live on Google Art & Culture, making these items available for exploration by the world. "Known as Mali Magic, the project has over 40,000 assets of digitized manuscript pages, a street view capture of nine heritage sites, and a 3D model and annotated tour of the Djenne Mosqué, the largest adobe structure in the world, initially built in the 13th century," TechCrunch said.

“[The manuscripts] are more than important historical documents. Central to the heritage of the West African nation of Mali, they represent the long legacy of written knowledge and academic excellence in Africa, and hold potential to inspire global learning from the actions of the past in confronting modern-day issues,” said Abdel Kader Haidara, the “badass librarian” known for smuggling the manuscripts out of Timbuktu (a city in Mali) and a collaborator in the Google project," Njanja reported.

On March 3, 2022, I stumbled across a tweet that spoke to more recent "uncertain times" and how people defend books and how books can be used as a barricade against hostile forces.

"This is the window of an urban researcher Lev Shevchenko in #Kyiv," tweeted Katerina Sergatskova. " He barricaded himself with books to keep the glass from flying into the room during the bombardment." 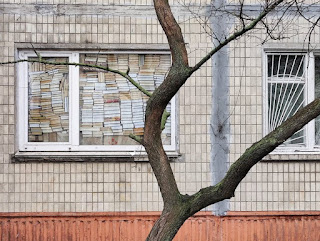 The tweet drew thousands of emoticons, and one commenter pointed out that while it was indeed  Lev Shevchenko's photo, it wasn't his window, "according to Rita Stenzel. "It may seem like a detail next to the war, but it's important to me that there's not a fake story behind a photo."

"On World Book and Copyright Day, especially in uncertain times, we must cherish and defend books as symbols of hope and dialogue," UNESCO wrote in its April 23, 2022, message posted on its website.

"Books have long embodied the human capacity to conjure up worlds, both real and imagined, giving voice to the diversity of human experience. They help us share ideas, obtain information, and inspire admiration for different cultures, enabling far-reaching forms of dialogue between people across space and time.

In 2022, the Mexican city of Guadalajara is taking up the mantle of World Book Capital, with a year-long programme that focuses on the role of books and reading in triggering social change, combating violence, and building a culture of peace.

On World Book and Copyright Day, UNESCO calls on its partners to share the message that books are a force to address contemporary challenges, understand political and economic realities, and combat inequalities and misinformation.

Storytelling is an incredibly effective tool when it comes to educating younger generations. Indeed, books are vital vehicles to access, transmit and promote education, science, culture, and information worldwide. For this reason, every year, on 23 April – a date that marks the departure of three great authors of universal literature, Miguel de Cervantes, William Shakespeare, and Inca Garcilaso de la Vega – we celebrate their captivating power to spark innovation, generate knowledge and change minds."