Nicol Brook, a mountain stream over two miles in length, runs along the western side of Mount Aureol and passes on through Freetown to the sea. 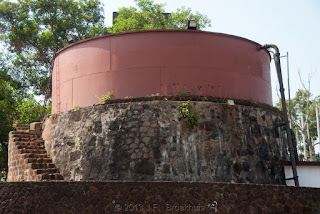 About 1870, the Martello Tower (pictured left) was used to support the new development in colonial Freetown.

On the base of the tower was placed a huge iron water tank, which came to control the supply of water to Government House.

In 1803, William Day, then governor of the colony of Freetown planned a defensive tower on Tower Hill, or what was then known as Wansey Hill. The hill was named after Nathaniel Wansey, a European employee of the colonial government who had a farm on the hill. The Tower-hill Barracks were completed in1827.

Day chose to use Martello Towers, a style of fortifications being built along the south coast of England for defense against invasion of the colony of Freetown. On April 1, 1805, governor Day led a procession up Wansey Hill, which was renamed Tower Hill, for the foundation stone laying ceremony.

After completion, the Martello Tower, as it was called, towered over the settlement.

When the Reverend Gustavus Ademu John bought a few acres of land in the foothills of Freetown’s Mount Aureol in the early 1930s, Tower Hill, which was some two-thirds of a mile to the east, was covered with trees and grasses.  Mount Aureol was separated from Tower Hill by a lush and verdant valley.

Down to 1929, the economy of Sierra Leone was almost completely agricultural. In an average year, each homestead produced most of, if not all,  its food requirements.

The bottom of the valley between Mount Aureol and Tower Hill had houses and its sides were clothed with vegetation on the Tower Hill side, trees and grass the Mount Aureol side, which is far the longer and steeper of the two.

The nearest houses to Mount Aureol were a quarter to one-third of a mile distant downhill in the western and northern directions.

In the high woods, were the country mansions of white colonialists, with patches of ground devoted to the produce of coffee and fruits.  Like Nathaniel Wansey, many European employees of the colonial government had farms in the hills of Freetown.

From 1930 to 1934, Arnold Wienholt Hodson a.k.a the “Sunshine Governor” served as colonial administrator. Hodson created the Sierra Leone Broadcasting Service, which launched on May 7, 1934. He later moved to the Gold Coast, where he continued work on his vision of radio communications between various parts of the British Empire.


Freetown is arranged along the shoreline and on the foothills of mountains. The shore is broken into a series of little bays, with hills soaring one above another.
Inland, and to the west, is intersected by the waters of the Port Loko and Rokel rivers.

Gustavus was born in Rokel Village on the banks of Rokel Creek surrounded by dense forest, plantations and large areas of swamp.

Gustavus’s oldest surviving daughter Florence, remembers her parents, Gustavus and Florence, shared similar experiences growing up in rural Hastings, about 15 miles east of Freetown. At the time Freetown had a population of about fifty thousand. Hastings is one of the many towns along Freetown’s peninsula.

“Gustavus attended the Architectural Institute in Freetown,” Florence wrote in an email conversation in December 2016. “

“On completing his architectural course successfully, the Sierra Leone Government Railway offered him a scholarship to pursue an advanced course in England, but his guardian, Rev. H.M. Steady, who was already in missionary work with the African Methodist Episcopal (A.M.E.) Church in Freetown, Sierra Leone, convinced him to join him in the missionary work,” said Florence, who is now 82 years old.

“Gustavus served as an A.M.E. Church missionary in Pepel, Tasso and Mange before marrying Florence,” Florence wrote. Gustavus married Florence before he started building schools and churches along the River Rokel.  Their first home after marriage was at Charles Street in the Western area [of Freetown], then they moved to Alfred Street in the East End, as he was to pastor the A.M.E. Campbell Church along Ross Rd.

In the East End, the couple lived in Mountain Cut before moving to the Floregusta Farm in 1930.

“The couple had ten children and Gustavus toiled his land to produce mangoes, pears avocados, pawpaw, oranges and lime and plum,” Florence said.

A “piece of land lying and being at Floregusta Farm, Off Kissy Road, Freetown in the Western Area of Sierra Leone and bounded as follows – On the North by a stream 1065 feet and by property… and otherwise 545 feet, on the East by private property and Sate property 406.1 feet, on the South by State 1527.8 feet, and on the West by property now or lately in the possession of Fourah Bay College 237.2, comprising in all 7.6270 acres.” 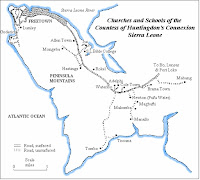 Professor H.M. Steady was a deacon and secretary in the Zion A.M.E. church formerly known as the Lady Huntington Church.  According to the World Methodist Council, the A.M.E. mission to Sierra Leone commenced in 1820 when Daniel Coker, the founder of African Methodism in Baltimore, arrived in Sierra Leone.

“Since Coker mounted an independent effort, John R. Frederick in 1886 became the first official AME representative in Sierra Leone. Frederick’s missionary successes, the strides of his colleague, Sarah Corham, and the adsorption of the Countess of Huntingdon Connection enabled Bishop Henry M. Turner on November 10, 1891, to organize the Sierra Leone Annual Conference,” the WME states.

A Revised Edition of the Ordinances of the Colony of Sierra Leone, Volume 1

The London and Paris Observer: Or Chronicle of Literature