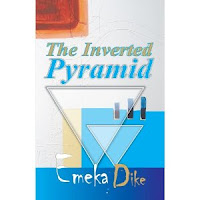 Emeka Dike's novel, The Inverted Pyramid (Trafford Publishing) is a must for readers of spy thrillers. Espionage, treachery, and intrigue play pivotal roles in this accurate portrayal of the struggle for power in Nigeria's political arena. The author also lays bare how a black African nation's destiny is determined by the actions of a few.

Azubike (Zuby) Thomas, the main character, flies in from London and lands into the arms of the Nigerian Intelligence agencies – a shadowy group of spies that change the course of history. Driven by unseen forces, Zuby sets out to investigate the power structure in Nigeria. But even before he starts to find answers to the many anomalies, he gets ensnared in a tangled web of deceit where money and sex rule. Zuby's pursuit of an explanation about what has stymied progress in Nigeria—chronic corruption and robbery of the State—ultimately leads him down a path of intrigue, espionage, and murder. Zuby makes his mark as a rookie spy, but he doesn’t become a true leader until he meets the Oba—a "king" who holds resplendent court in a prison filled with the misery of beggars and thieves, and the triumph of a framed-up man, Nnamdi.

With a style reminiscent of Azadeh Moaveni, Ian Fleming, and Chinua Achebe, Dike uses graphic word pictures to paint a landscape of dual identity; vamps, villains and virgins; the dusty red earth that covers up the green foliage in the East, and the problem that touches everything in Nigeria: bad leadership and governance. Although a dark tale, Dike has an enlightening message for his readers.

Chukwuemeka George Dike, 52, is a resident of Lagos. The Inverted Pyramid is his first book. Dike was born and raised in Ibadan before leaving for boarding school in England and much later, university in America. He is managing director of an equity & research firm and is married. The couple are blessed with seven children. Since 1985, he has run The Kenneth Onwuka Dike Center, which he describes as a center for African history that is dedicated to building up a data base for historical sources in African history. Currently, he is working on republishing Trade and Politics in the Niger Delta 1830-1885. The classic was written by his late father Professor Kenneth Onwuka Dike. The elder Dike attended Fourah Bay College in the 1940's.

I chatted with Emeka Dike by email. Below are excerpts from our conversation:


Vitabu: Is this your first novel?
Emeka Dike:Yes

Vitabu: Which books inspired you?
Emeka Dike: I was not inspired by any book in particular. However, my favorite book is Crime and Punishment by Dostoevsky

Vitabu: What stories are you moved by?
ED: Stories that I can learn something from.

Vitabu: What kind of story is The Inverted Pyramid?
ED: I describe it as reality fiction. It's fiction but based on hard truths.

Vitabu: Why did you write on this subject?
ED: The subject of the 'Nigerian factor' or Inverted pyramid is at the heart of discussions between Nigerians 90 percent of the time! We need to understand our problems before we can find solutions.

Vitabu: Who did you write the book for?
ED: Every Nigerian/ African from 18 years and above that is literate, and particularly those who have grown up in the diaspora. The book was more therapeutic for me than anything else. I was tired of Nigerians describing their problems as if they were impossible to fathom. I wanted to break it down once and for all. We need to be honest with ourselves in Africa. Too many people are on the fence hoping that their turn will come to get a piece of the pie, hence they don't talk; they don't rock the boat. I wanted to rock the boat, so this is my personal way of doing it. Our so called leaders are getting away with far too much. The African intelligentsia has to wake up and take them on.

Vitabu: How?
ED: The first step is a better awareness, not by a handful of educated Africans but the middle class. If it does not exist then we have to create it with education. We take so much for granted that you and I may know but so many other educated Africans do not think of. Nigeria is a tough place in this respect; the oil money is dangled as a carrot so many look the other way.

Vitabu: Where did you draw your characters from?
ED: Mostly from my imagination but Zuby is partly autobiographical in some aspects. Baba [is based on my late father], but I only realized it half way through writing.

Vitabu: Zuby is a comparatively well off Nigerian: educated in public school in England and at an Ivy League university in the United States. He's an athletic man who can break a man's neck in a snap. He also has a good grasp of world history, economics, international finance and banking. Do you see connections between Zuby's life experience/philosophy and yours?
ED: Zuby's views are not necessarily my own. There maybe some aspects of Zuby that are autobiographical but I AM NOT ZUBY. [Caps are Emeka's].

Vitabu: Why?
ED: Zainab is fearless, courageous and is not afraid to flaunt convention. Adelaja is everything I hate in the Vested Interest. He is evil and depraved.