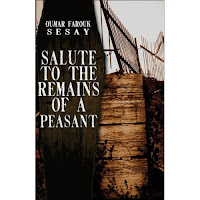 Thursday, March 21 was UNESCO (United Nations Educational, Scientific and Cultural Organization) World Poetry Day. In keeping with the message from the director-general of UNESCO, Irina Bokova, I recited home-grown poems that I'd found to be the “purest expressions of lingusitic freedom.”

The verses hold a special significance for me because they were penned at a time of great dread. "[P]roduced by a group of Sierra Leonean writers who met regularly throughout the war,” wrote Penny Boreham in “Sierra Leone's poems of war”  for BBC African Performance Freetown (May 2007).


The landscape of Sierra Leone's decade-old civil war [1991-2002] seems to drape most of the poems by Oumar Farouk Sesay, observed one reviewer. Sesay, one of the poets Boreham spoke to, has been published in many anthologies of Sierra Leonean poets, including Songs That Pour the Heart and Kalashnikov In The Sun. He told Boreham: “[E]very individual in Sierra Leone was confronted with his or her own mortality.”


"No-one escaped," he says. "Status did not matter. I began to realise that soon we all would exit and then I began to consider what would be left behind. This is why I wrote My Will."

When I die
Don't bury my poetry
In the prison of your
Shelves under your beds.
In your cockroach
Infested boxes for mice
And cockroaches to dine.
Don't pluck the pages of
My poetry to wrap crumbs.

I recited My Will's thirty-seven words most of Thursday--"continuously renewing defenses of peace in the mind" (Bokova) and imagining Sesay all those years ago amid the horror; sharing what Boston physician and poet, Oliver Wendell Holmes, called "the incommunicable experience of war." 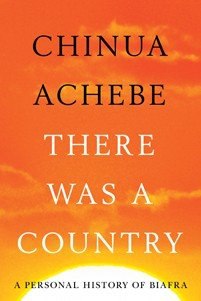 Reading Chinua Achebe's last work "There Was A Country" in the fall of 2012, I found the legendary author had shared a similar "incommunicable experience" of the Nigerian civil war, also known as the Biafran War, (1967-70). "The conflict was infamous for its savage impact on the Biafran people," says the flap.  On the back Nadine Gordimer wrote:


"Chinua Achebe's history of Biafra is a meditation on the condition of freedom. It has the tense narrative grip of the best fiction. It is also a revelatory entry into the intimate character of the writer;s brilliant mind and bold spirit. Achebe has created a new genre of literature in which politico-historical evidence, the power of story-telling, and revelations from the depths of the human subconscious are one. The vent of a new work by Chinua Achebe is always extraordinary. This one exceeds all expectation. "


Achebe died Friday, March 22 in Boston. For me, the news was somewhat unexpected.

A statement "On the Passing of Chinua Achebe" put out by Wole Soyinka and John Pepper Clarke read:


"For us, the loss of Chinua Achebe is, above all else, intensely personal. We have lost a brother, a colleague, a trailblazer and a doughty fighter. Of the “pioneer quartet” of contemporary Nigerian literature, two voices have been silenced–one, of the poet Christopher Okigbo, and now, the novelist Chinua Achebe. It is perhaps difficult for outsiders of that intimate circle to appreciate this sense of depletion, but we take consolation in the young generation of writers to whom the baton has been passed, those who have already creatively ensured that there is no break in the continuum of the literary vocation.

We need to stress this at a critical time of Nigerian history, where the forces of darkness appear to overshadow the illumination of existence that literature represents. These are forces that arrogantly pride themselves implacable and brutal enemies of what Chinua and his pen represented, not merely for the African continent, but for humanity. Indeed, we cannot help wondering if the recent insensate massacre of Chinua’s people in Kano, only a few days ago, hastened the fatal undermining of that resilient will that had sustained him so many years after his crippling accident.

No matter the reality, after the initial shock, and a sense of abandonment, we confidently assert that Chinua lives. His works provide their enduring testimony to the domination of the human spirit over the forces of repression, bigotry, and retrogression."


Achebe's works (this list is incomplete) Things Fall Apart, Arrow of God, A Man of the People, No Longer at Ease, Anthills of the Savannah, The Trouble with Nigeria, Girls at war and other stories, Chike and the River, and How the leopard got his claws are hallowed texts (Bokova).

For more than 150,000 Facebook users on a site maintained by Achebe's publisher, Alfred A. Knopf/Anchor Books, the somber status announcement:  “We are sorry to report that Chinua Achebe, the "Father of African Literature" died last night at the age of 82” brought a sense of loss no less depleting than for Clark and Soyinka.

As people woke up to the news Friday, the wall saw a growing collection of poignant posts with fans paying tribute to Achebe.

[H]”ow do you "unlike" this kind of news without having to like it?” pondered one fan.

“The Earth has lost a great son,” wrote another. “With his stories, he inspired so many to dream, and more importantly, to value Africa and its cultures.”

“Mr. Chinua Achebe was a huge influence...I can never forget reading "Things Fall Apart" in the 10th grade and loving it,” wrote Kamara from Sierra Leone.

Born on the slopes of Mt. Kenya and an undergraduate student at Jomo Kenyatta University, Muchomba Ezra reminisced on his wall about his first read:

"[I]n standard six...I was caught reading a novel in class while the teacher was busy teaching grammar ...That book was A Man of The People by Chinua Achebe...I would later on read Things Fall Apart and No Longer At Ease...

[Y]ou know while reading the first book I couldn't differentiate between fictional work and real stories and this [Chief] Nanga character was one.

Its saddening to note that this man who inspired my reading has passed on. But noting we are all mortals and headed there too we celebrate his life—well lived; his works will remain ingrained in our minds for they shaped our lives."


Going by a rough count of Facebook status messages and tweets, Achebe's works--quotes and chapters are touchstones and Internet memes.

Afruca, a charity promoting the rights and welfare of African Children in the Britain, tweeted that a Kenyan member of parliament had recited the entire first chapter of Things Fall Apart.

In a 2008 Washington Post profile, Achebe told  Bob Thompson that he was astonished by the success of  Things Fall Apart.

“I don’t think there was anybody who would have thought that up,” Achebe said. “If anyone did, I would say they were out of their mind.”