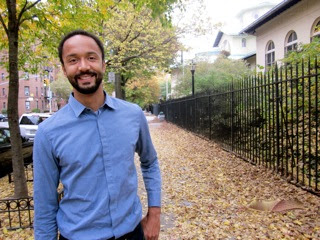 Vitabu had a telephone interview scheduled with Deji Olukotun on International Women's Day but the flu got in our way. As luck would have it, we are publishing the writer's answers to questions we sent him by e-mail on Vitabu's third anniversary, reason enough to name his newly released e-book, Nigerians in Space, as our best choice for World Book Day. Olukotun is a lawyer and and writer with global development and advocacy experience.


Vitabu: What inspired you to write "Nigerians in Space"?

Deji Olukotun: I'm Nigerian-American, so I have always been interested in Nigerian history and culture—but also the country's future. I traveled to Nigeria at the beginning of the tech boom, and I heard the phrase "Brain Gain" for the first time. You see, the government was trying to tap into its diaspora community to kickstart its development, and I knew how many incredibly talented Nigerian scientists I had met during my own lifetime, so it seemed like a good idea. But I could see that not all Nigerians were happy about having people who made their careers abroad come back and tell them what to do. I wanted to mash this together with crime fiction in what I hope is an engaging read.

Vitabu: I found Wale Olufunmi's story in "Nigerians in Space" like a roller coaster ride from the get-go with the stealing of moon rock at NASA Johnson Space Lab. Did you visit the real NASA site to do background research?

Deji Olukotun: I traveled to Houston [in Texas], but not to NASA. Houston has the largest Nigerian population in the U.S., so it made sense to locate Wale there. And I did a lot of research on NASA's lunar geology lab to come up with the story. The amazing thing is that Nigeria launched its real space program at the time—something I thought I had completely invented.

Vitabu: In your book, we move back and forth between Wale's experiences, running side by side yet separately from, Thursday and Leon's world. But not before we leave Tinuke (Wale's wife) totally confused, and Wale in a state of almost comical distress at the airport holding the snow globe on his head, to get drawn into “Bathing with Perlemoen.” Did you go abalone fishing or was it all imagined and envisioned?

Deji Olukotun: When I was living in South Africa, I traveled to the town of Hermanus, which is one of the hotbeds of abalone poaching. I met with locals involved with the trade and spoke with prosecutors and law enforcement about how they are fighting poaching. Talking to various people made me see the complexity of life in a town wracked by poaching, especially when legitimate jobs are few and far between. And there's the natural beauty of Hermanus, which is truly breathtaking. Unfortunately, I'm not much of a swimmer!

Vitabu: At Mr. Tebogo's we finally get to meet the elusive Nurudeen Bello. The man who Tinuke thought “did not deserve to be named because he shot an arrow into the sky and covered his head with a mortar bowl.” We also meet Tebogo's daughter, Melissa, dealing with a form of vitiligo. Vitiligo has been called a neglected disorder, did you intend to bring out the issues and how damaging the disorder can be socially and psychologically?

Deji Olukotun: If black is beautiful, then what happens when your skin isn't black enough? Being mixed race, I've been interested in this question for a long time. I befriended someone who suffers from vitiligo, a truly gentle, warm human being, and I was deeply saddened by how having imperfect skin could take a psychological toll. There are few treatments for vitiligo and, as far as I know, no cure because it is not dangerous and it does not afflict enough people to merit the expensive research. In the story, Melissa's father desperately wants her to find a cure, and she covers her body entirely out of shame; but her father doesn't realize that he is reinforcing that shame, despite sacrificing his career to help her.

Vitiligo affects people of all races—in this sense it's an equalizer. A total absence of pigment in the skin is albinism. Albinos suffer in some cultures in Africa, especially in Tanzania, where albinos can be killed for their body parts for use in spiritual medicine. I wanted to turn this concept around by finding something beautiful in Melissa's imperfection.

Vitabu: In Melissa's story, we also catch a glimpse of an often forgotten problem: young African girls and boys being trafficked from Rwanda, Central African Republic, Niger, Zaire, and many other countries into Europe.

Deji Olukotun: It's not just to Europe. I was working as a refugee attorney in South Africa, and I spent a few days working with UNHCR [the UN's refugee agency]to go door to door to tell refugees about opportunities for them to return to their home countries. I stumbled upon this house of girls who had been sent to live in a suburb of Cape Town by their families for a better life. Their parents didn't live with them and the girls were supervised by a woman who sent them to local schools.

In one sense, the parents had made a choice to send these girls to South Africa, but I thought about the serious upheaval and isolation that they would experience, and how they would be so dependent on their caretaker, who could help or hurt their lives on a whim. What if their caretaker was a tyrant? That's what I was exploring when I had Melissa's father send her to France. She isn't sent to the glitzy, glamorous boulevards of Paris, but to an isolated suburb with crime and grit.

Nigerians in Space has just been published by Ricochet. A print edition will be released in May. You can buy the book directly from Ricochet, which is the best way to support the project, or from other major retailers such as Amazon, Kalahari, and Barnes & Noble, with many more publishers on the way.