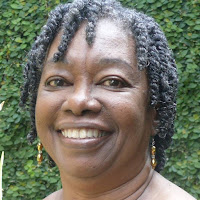 In a  Facebook chat, Hunter said once she had decided how she wanted to tell the story, she started writing with rewrites spread over about two years. Hunter doesn't plan a sequel to Redemption Song.

"I did do a kind of prequel, which was Joy Came in the Morning, whose heroine, Cobola Ennison was the Martins' neighbor in George Town," she explained.

The Martins and Cobola Ennison are central characters in Hunter's Redemption Song.

Currently, she's working on a long, short story, which she plans to keep secret; because she's not sure if she'll ever finish it.

For now, she is editing old folk tales that were collected by Gladys Casely-Hayford, a legendary poet, musician, dramatist, painter, and story-teller.

Here is a short excerpt from one of the stories, which Hunter says will be out as a collection sometime in 2018.

The Magic Calabash
"Listen, children, to a story of the magic calabashes or 'Take me, take me, take me.
"Once, in a little African town, where streets ran crazily like red ribbons over Mother Earth, and which was green with the verdure of tropical plants and flowers, there lived a woman named Mammy Cama cama. She had a very beautiful daughter called Ayo. Slender of form was she, smooth of skin; and her hair of the hue of night, hid in it all the sunbeams shed from the year's beginning to its end. Her hands, black and beautiful shaped, were absolutely untrained for useful tasks..."

Hunter's two-hundred-page biography is an attempt to place Casely-Hayford back in the centerpiece of in the cultural history of Sierra Leone, she said.

Casely-Hayford was born in the Gold Coast (now Ghana) in 1904 and died there in 1950, though she spent most of her life in Freetown, Sierra Leone and became the cultural luminary of her day.

After Hunter published  An African Treasure, she was invited to write an article on the Sierra Leonean-Ghanaian literary figure for the Dictionary of African Biography (Oxford University Press).

"I think I was meant to write this book [An African Treasure] because I happen to be married to Gladys's only son," Hunter told Vitabu in 2013.

"Also, my mother and her sisters attended the Girl's Vocational School established in Freetown by her mother, the more famous, Adelaide Casely-Hayford. Most of the people who knew Gladys personally had passed on, but I already had some firsthand accounts of her from my husband, my father-in-law, my mother and my aunts," she said.

Hunter's most recent novel Nanna (a sequel to Joy Came in the Morning) was published by Sierra Leonean Writers Series which nominated her as "Author of the Year" in 2015.

All Hunter's novels are set mainly in Freetown, Sierra Leone, "the place and people I once knew best," she explains.

Hunter now lives with her husband in Accra, Ghana.

Born in Sierra Leone, Hunter was employed by the Sierra Leone Ministry of Health as the librarian at the Connaught Hospital in Freetown, before going to Congo-Brazzaville to head the Library and Health Information unit at the Regional Office for Africa of the World Health Organization. She took early retirement in 1999 and was made a Fellow of the British Library Association (since renamed the Chartered Institute of Library and information Professionals).