Vitabu Reads | In Search of Sons 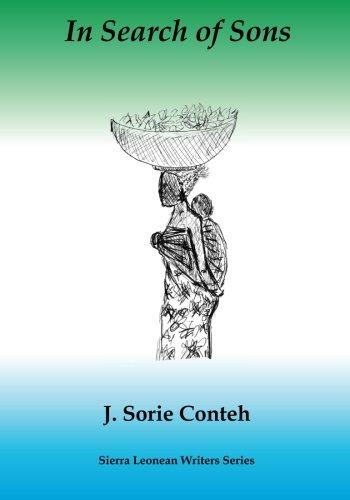 The 200-page novel beautifully crafts the past in fictional Talia as the story weaves around life in a rural town during the railway era. Sierra Leone’s rail operated from the 1890s to the mid-1970s.

Conteh’s gripping tale is probably set at the latter end, when air buses had become a more preferred mode of international travel than the work-horse ocean liners of the 1950s and 60s.

The story begins with a fleeting introduction to Kunaafoh, the now adult daughter of Giita, the novel’s tragic heroine.

Although Kunaafoh appears to be the narrator of the ordeal her dead mother went through, she is inexplicably placed in the background while the reader is carried along in her river of memories.

Along the way, Conteh provides fascinating insight into traditional Mende life as he courses through compounds, villages, forests, and rivers to spotlight a marriage buffeted by a complex mix of beliefs drawn from animism, Islam, and Christianity.

When the flashback begins, Kunaafoh is a prepubescent girl or a teenager. Her father is about to marry her off to the town’s chief to increase his family’s social standing, and her brothers are to be sent to the city to live with their father’s brother, a World War II veteran of the Burma war working his twilight years in a central locomotive yard.

From that point, Conteh deep dives into layers of superstition, tradition, and cultural mores as he lays out the sequence of events that lead to the death of an older mother in pregnancy. Although Conteh offers a glimpse into how rural women deal with reproductive problems, divorce, and polygamy, the weight of the book seems to be more focused on a lost way of life than the passage of time.

Once Kunaafoh exists stage left at the beginning, it’s clear that the time between her disappearance and the death of her mother in childbirth is not more than two years. Or most probably only about a year, during which Kunaafoh’s father marries a younger, second wife; Giita, Kunaafoh’s mother, becomes pregnant, and a letter arrives out of the blue saying Kunaafoh was in the process of qualifying to become a nun as well as a medical doctor in Ireland!

The twist in the tail in Conteh’s In Search of Sons isn’t that a mother dies trying to fulfill her husband’s desire for more male children. But that the passage of time in the novel leaves you trying to find something you think you might have missed in the idyllic setting of Talia.