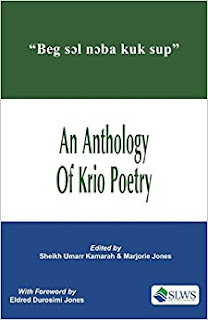 It’s been 16 years since “The Child of War And Other Poems” was published among a host of poetry reflecting on Sierra Leone’s war. Fighting began on March 23, 1991 and ended in 2002.

It’s also been 16 years since I last read Sheikh Umarr Kamarah’s 36-page kids book. My first reading of “The Child of War And Other Poems” was tinged by a sense of disappointment.

Apart from the cover, with an image of a young man holding a green flag in front of an M1 Abrams battle tank, in what appears to be a cornfield surrounded by a forest of tall trees, there are no other drawings. The kids’ book is devoted more to text than illustrations.

When I finally revisited Kamarah’s poetry for the 2017 Vitabu Reads series, I find the slender book covers a wide canvas with big stories behind the backdrops of text.

Right up front, Kamarah conjures up the stirring image of an iconic landmark in his poem, Freetown Cotton Tree.

“Towering x feet of
Agelessness
Bending under the weight of history

If trees could talk…what stories our Cotton Tree would tell!


In  “The Child of War,” the poem that gives the book its name, the poet presents tales the nation would rather forget. The graphic depiction of horror—from ‘butchered parents in Liberia’ to the ‘camps of Sierra Leone’ — are where ‘vultures play the media crew’ and children die each day.

Eight poems away, Kamarah pushes psychological depths even more with images of people caught up in the brutality of war.

ashes of flesh and bones”

Reading The Child of War And Other Poems again, I think that some thematic order would have added to their power for a kids poetry book.

One example of a lineup perhaps would keep the scourging images together in The Child of War, Broken Gates, and Rhythms of Pain; weld the caricatures of peace in This Piece of Peace, and in Lome: A Baptism of Fire; and then highlight exploitation in Waiting to be Tapped, and The Misery of Diamonds.
Kamarah’s muses on migration could feature as a pack in A Lost Generation and Telephone Yawnversation, closing out with dreams, dispossession, aging, and death in On A Summer Evening at Lake Mendota, Waiting for a Ride to a Nursing Home, Death in Exile, and Memories of Tomorrow.


More than a decade after The Child of War was first published by Tabay, the Sierra Leonean Writers Series released An Anthology of Krio Poetry, edited by Sheikh Umarr Kamarah, currently a professor of English and Linguistics at Virginia State University, and Mrs. Marjorie Jones who held various positions on the editorial board of African Literature Today.


The Anthology is a 100-page book and comes with a foreword by Eldred Durosimi Jones, husband of Marjorie Jones, and a pioneer in what Elizabeth Kamara describes as “African Literatures in English, African Linguistics, Sierra Leonean Literature and languages, including Krio.” 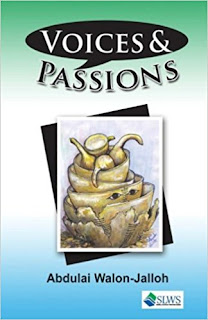 “This small anthology of Krio poetry illustrates how far the language has travelled,” writes Professor Jones. Preachers, teachers, playwrights, and social commentators and the variety of authors in the collection show the language is now established as an artistic vehicle through which poets highlight Sierra Leonean beliefs, hopes, joys, and disasters,  he adds.

To give Krio some context, Dr. Kamarah provides a history of the language and an alphabet.  Don’t read “Beg sol nabakuk sup” and 40 other poems in the Anthology without the alphabet that the doctor ordered.

The 50-plus poems in Abdulai Walon-Jalloh’s Voices & Passions,  published by Sierra Leonean Writers Series in 2015, are just as thrilling in their syntactic variation, which Edmund Bamiro notes, are also found in countries where English is used as an institutionalized second language.


Published a few years after Sierra Leone marked its 50-year jubilee celebrations on April 27, 2011, Abdulai explores what the date, April 27, and independence in 1961 means today in his moving poem: 4.27.61:

Abdulai’s lines don’t stay in the doldrums for long though.

Upbeat notes in his eclectic collection explore ideas, sounds, words and images that enrich our understanding of his experience growing up in the east end. Or what he calls the “home of seminal processes and the backyard of upward progress” in his poem The East-end.

Six years before Abdulai was born, Sierra Leone opened a new central public library in Freetown on January 10, 1964. It is through the portals of that central library that Abdulai ‘mastered complex ideas, broadened his vision, and now contributes to the development of society of which he is a part.’

Designed by Sierra Leonean architect, Jarrett Yaskey, in 1963, the two-floor concrete library has a floor area of about 15000 sq.

In his praise poem, Sierra Leone Library Board, Abdulai lifts the humble building to new heights.

“What a squattish brilliance? He asks the dubious observer.

“Though your limited presence
Is agony for many

“Oh! Great semi-centenarian!
Continue the wondrous accent
As you take your children in your stride
For there are more heights to be scaled.”

Other images from Abdulai’s childhood in his city known for lush vegetation and torrential rain are found in poems that run from The Mango Tree--which stands firm against lashing rain and provides shelter from the sun--to The Rainy Season that rips with lightening, thunderclaps, flash floods, and swollen streams.

In Abdulai’s poem, Neneh, we spend a day in the life of a neneh (meaning mother). Through the poet’s simple lines, we catch a glimpse of faith and family.

Neneh rises at dawn with the cockcrow, and then prays with the first cry of the muezzin.  Next, she’s at her stall as the BBC radio signal begins to beckon with its distinctive signature tunes. As the clock chimes noon, Neneh shops for the day’s meal. When the muezzin announces Zuhr, Neneh prepares lunch after prayer and is back at her stall after the calls for Asr. She prays again after Maghreb before returning home when the muezzin calls for Ishaa.

Challenging Neneh’s collective conscience is the urchin in Market Borbor.

“In the throng of bodies
Market Borbor excels
Amidst reckless robberies

“The sandwiched market
With innumerable exist and entrances

The title poem Voices is a proverb for Abdulai’s people:

“Voices are loud and clear
Yet in ears duller
Hearken! They say is a virtue!

In this edition of poetry, Ahmed Koroma returns with poems from his previous collection Of Flours And Tears, while introducing new poems on life and times along the Odokoko River.


As a journalist, I couldn’t help noting that the mountain stream, Odokoko, was once called by a slightly different name in T.J. Allridge’s colonial travelogue: "A Transformed Colony: Sierra Leone." 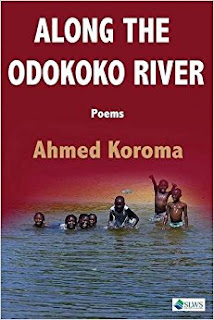 Along The Odokoko River, a 2016 book published by Sierra Leonean Writers Series, comes from a poet, who also grew up in Abdulai’s east end neighborhood, under the towering Fourah Bay College on Mount Oriol.


“What the Government has recently done in bringing a fine supply from the hill streams known as the Congo, the George, and the Ederoko by iron pipes into the town is a boon which is of incalculable value to the community.”

In Ahmed’s “Odokoko Flow” and Odokoko Blues” the hill stream is a “creek where red water flows.”

“The poet’s vision is inspired by loyalty to the lands bordering the East and West bank of the Odokoko,” explains Mohamed Gibril Sesay in the foreword of Ahmed’s book.

“For I was born and raised along this flow
Tiptoed over its course on jagged rocks,
Survived the flood, the red water gush
Never afiad of the deluge, or another rush”

“This river seems shallow but it is so deep
And I’m raring to go for that desperate leap
Over the course of the embankment I hurry.
But in Dear River, the poet almost pauses in thought for those who didn’t or couldn’t reach the top.

For a fleeting moment, the poet seems to want to drown the sorrow that hangs over him on the river bank; let his sorrow sail along when the river passes by next time.

Instead, he pulls back from the venture of dare and uncertainty:

“Let the pebbles that get washed
Downstream by your might
And the debris that float on your back
Take that journey for me.”

Ahmed Koroma is an analytical chemist by profession. He graduated from Fourah Bay College with a bachelor’s degree in chemistry and earned a master’s degree also in chemistry from California State University at Northridge. He lives in California.